I've recently made some improvements to this pulled pork recipe to make it more user friendly for both people using gas grills as well as those who use charcoal BBQ's.

Either way, gas or charcoal, the best pulled pork is always cooked low & slow, usually between 200F and 225F and for 6 to 8 hours, sometimes longer depending on how much pork you're cooking.

Because this particular recipe is North Carolina style it includes a vinegar based sauce, also called a Mop, to baste the pork while it cooks.

And after it's cooked and shredded you'll use a special sauce or slather that keeps the meat nice and juicy. 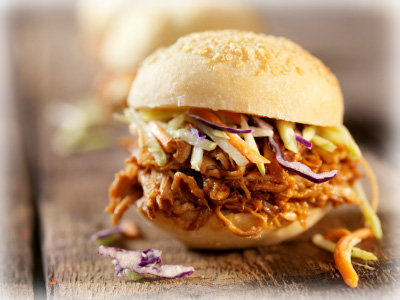 After the meat has been shredded, add it to a crockpot or large aluminum pan, pour in the sauce, stir and either refrigerate until it's needed or serve it right away.

This way you can make this recipe a day ahead and then just warm it up for a couple hours before serving.

If you use the crockpot it keeps the pork warm and juicy for as long as you're serving it.

When you go shopping for the pork for this recipe make sure you ask for a bone-in Pork Shoulder roast (also called pork butt or Boston butt).

For best results "marinate" the pork in the rub up to 24 hours before cooking.

Also, prepare the basting mop and final slather 24 hours ahead to let the flavors blend. 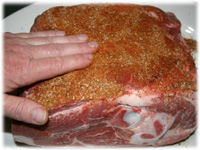 Begin rubbing the All American BBQ Dry Rub recipe (or your favorite store bought BBQ seasoning) over the entire surface of the roast.

Place the dry rubbed pork roast on a large pan or sheet and cover completely with plastic wrap.

Place in the refrigerator for up to 24 hours to allow the rub to season the meat. 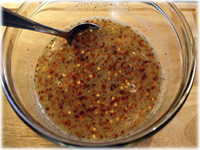 Step 2:
In a medium glass bowl mix the ingredients of the basting Mop described above.

You will apply this Mop after first putting the pork roast on the grill and once every hour during the cooking session.

Setup the grill for Indirect cooking.

Soak 2 cups of hickory wood chips in a 50/50 water/apple juice mix if using that or have on hand 1 cup of hickory smoking pellets.

If using a gas grill then prepare the smoking box or make the smoking pouches described on this smoker grill page.

Also, if using a gas grill for this make sure you've enough gas to last the cooking duration - could be over 8 hours! 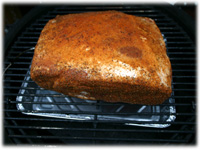 Step 3:
Remove the pork roast from the refrigerator, keep it covered and allow it to come to room temperature while the grill is preheating.

Add 1/2 cup hickory smoking wood or a handful of smoking pellets to the fire.

Place an disposable aluminum pan filled with water under the grill.

Place the roast fat side up on the grill over the pan of water. 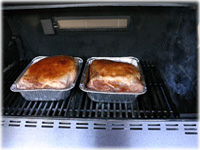 If using a gas grill preheat the grill to high and add the smoker box or smoking pouches.

When they begin to smoke, reduce the heat to 200F - 225F and place the pork fat side up in a disposable aluminum pan on the grill not over direct heat.

Ensure you have the probe of a remote temperature monitor inserted to the middle of the pork roast but not touching the bone.

Set the alarm temperature on the monitor to 185F. 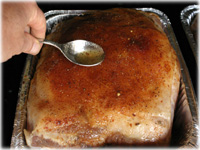 Step 4:
Monitor the temperature of the grill - it's important it stays within a range of 200F and 225F for this recipe.

Once an hour open the grill and baste the roast with the mop.

If using a charcoal grill you may need to add additional charcoal every hour depending on your grill. 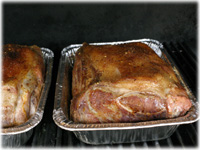 Add additional smoking wood or pellets each hour. Eventually the roast will develop a thick crust or bark and the smoking woods or pellets will have little effect.

Step 5:
Once the roast has reached an internal temperature of 185F it's time to remove it from the grill.

Transfer it to a large pan and cover with foil to rest at least 15 minutes.

If the pork is done properly it should look like this... 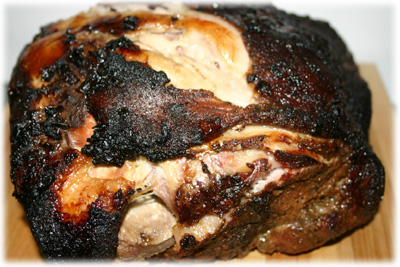 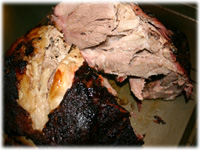 Step 6:
Now it's time to shred or pull the pork. Cut through the center of the meat to split it open or just use your hands to start prying the meat away from the bone.

It's natural to see a pink tinge to parts of the meat near the crust - this is called the smoke ring and it's the sign that the smoke you used during cooking penetrated the meat.

You'll be discarding the fat but make sure you pick through it well as there's always juicy chunks of meat attached.

For shredding the pork some of the options are:

I typically use my fingers but be very careful as the meat is hot. You may want to use some sort of rubber or latex glove.

Always pull the pork when it's hot as it shreds more easily.

Shred the meat either into a large aluminum pan or into a crock pot.

I recommend the crock pot with a removable pot as you can store it in the refrigerator and then heat it back up prior to serving (the next day for instance). 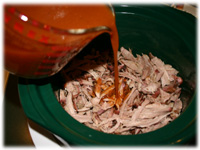 Step 7:
In a medium glass bowl mix together the final barbecue slather sauce using the ingredients described above.

Pour this barbecue sauce over the shredded meat.

Distribute the sauce throughout the meat evenly using a large spoon.

If using a crock pot for serving set it to medium and cover.

Serve the meat on fresh buns.

Traditionally a North Carolina pulled pork recipe also include a topping of cole slaw on the shredded meat.

You can also serve the meat on a plate without a bun - try a side of baked beans and grilled corn on the cob! 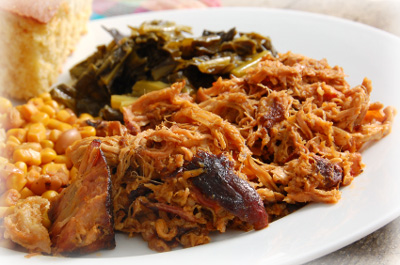