This is the original Bacon Explosion recipe made famous by the guys over at BBQ Addicts and when it was featured in the New York Times, CNN.com and Good Morning America it went viral.

Don't be surprised by the simple list of ingredients, the Bacon Explosion more than lives up to its name with an incredible explosion of flavor.

The simple combination of bacon, Italian sausage, your favorite BBQ seasoning and BBQ sauce is all it takes to make this.

These are selling pre-cooked and packaged for over $30 at BBQ Addicts as well as delicatessens world-wide. If you're in Canada add another $30 for shipping.

Why buy one when it's so easy to make your own at home for a fraction of the cost? 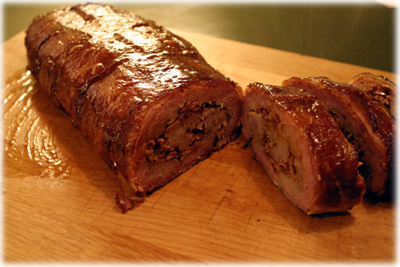 The picture above is the Bacon Explosion just off the grill, sliced and ready to serve.

You can see the outer bacon layer smothered in BBQ sauce glaze surrounding the Italian sausage and an inner layer of cooked bacon along with more BBQ seasoning and sauce.

This is really easy to make and not only tastes great hot off the grill, but can also be served cold after it's cooked, sliced thin as an appetizer.

Maybe I should start selling these too! 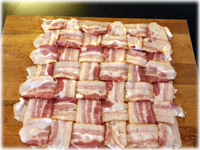 Either way, use enough bacon to form a tight over-under weave pattern to hold all the ingredients in place. 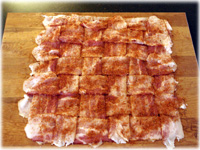 Next, sprinkle some of the BBQ seasoning powder over the bacon. 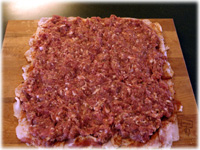 Layer the sausage evenly over the bacon out to the edges and press it down to make it like a big square patty.

I prefer to use mild Italian sausage but hot would be ok too.

If you're not using a container of bulk sausage meat but you're using individual sausages, remove the casings from each one and mix all the sausage meat together before spreading it over the bacon. 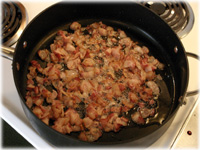 Cut the rest of the bacon up into 1/2" chunks and start frying it.

I find it best to fry it so it's not too crispy and still has some softness to it. 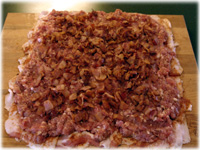 Place the fried bacon pieces over the sausage meat. 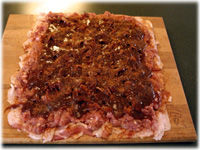 Cover the bacon and sausage with some BBQ Sauce and some more of the BBQ Seasoning powder you used on the bacon weave.

About a 1/2 cup of sauce should do the trick and a couple tablespoons of seasoning. 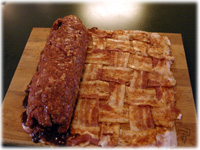 Step 2:
Things can get a bit messy now.

You're going to very carefully separate the sausage patty from the bacon weave at one edge and start rolling it up backwards.

Roll it up like a jelly roll and keep the seam side down on the bacon weave and try to pinch the ends closed if you can.

Try to squeeze out any air pockets, don't worry if a little BBQ sauce oozes out. 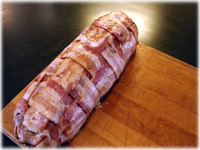 Sprinkle some more of the BBQ seasoning powder over the surface.

You should have a Bacon Explosion that looks something like this picture.

Don't worry if some sauce has oozed out the ends or it isn't perfect, once it's on the BBQ it firms up nicely and the bacon pretty much seals itself and everything else inside. 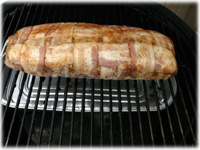 Step 3:
Set up your smoker, BBQ or grill for indirect cooking.

Place an empty aluminum drip pan under the grate you'll be cooking the Bacon Explosion on.

When it's reached temperature toss a handful of grilling pellets on the hot coals if you're using them.

If you're using a gas grill and want to use grilling pellets either use a smoker box or make these easy aluminum smoking pouches.

Place the Bacon Explosion on the grates over the drip pan.  If using a remote temperature meter insert the probe into the center of the meat. 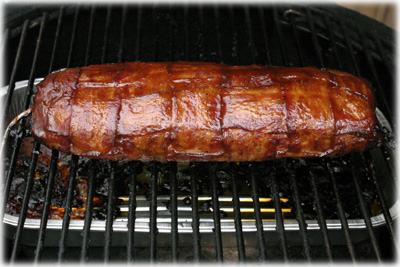 About 20 minutes before it's done cooking slather up the outside of it with some more of your favorite BBQ Sauce.  Put it on too soon and it might burn.

Once you remove it from the heat you can pretty much slice it up and serve it, you should see a nice pinwheel pattern inside like the picture above.

Obviously, the number of people you serve depends on how thick you make the slices.

Another option is to seal the cooked Bacon Explosion and refrigerate it until later and use it as a cold appetizer.