Learn how to use a BBQ Rotisserie - it's easy!

Including a BBQ Rotisserie unit with your grill (gas or charcoal) is a great idea. If you're about to buy a new grill ask if they'd throw one in with the deal. 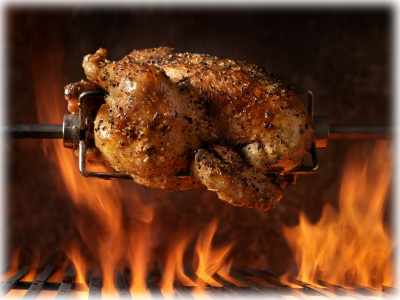 Usually less than $100 it's a very inexpensive option which gives fantastic results when grilling.

Most big-box hardware stores and BBQ centers have many to choose from.

One of the major advantages to rotisserie cooking is that larger cuts of meat including chickens self-baste as they rotate over (or in front of) the heat.

One of the best tricks is to make sure the food you have on the rotisserie spit is fairly uniform in size from one end to the other. That ensure it cooks evenly.

It's always a good idea to tie up or truss the meat with butchers twine to make this happen and to prevent chicken legs from flopping about.

Here's some easy step-by-step photo instructions below to get you started... Read Reviews/Leave Comments

Home › Barbecue Tips › How to use a BBQ Rotisserie

Step 1:
Select any type of meat - ensure it's fairly uniform in shape for even heating. For birds, make sure the wings and legs are trussed and secured so they don't flop around while cooking. 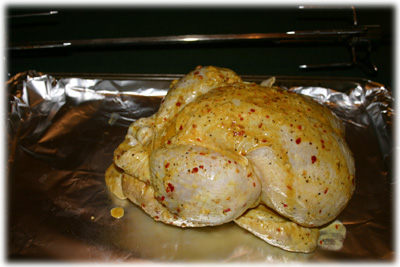 Step 2:
With one set of prongs on the rotisserie skewer, insert the skewer rod into the meat from one end to the other. 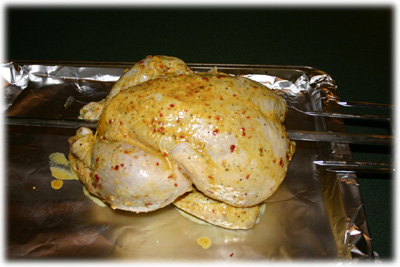 Step 3:
When skewer is through the meat attach the other set of prongs to the rod and insert into the meat. Tighten the screws to secure the prongs. You'll likely have to re-adjust the position of the meat on the rod when you install the rotisserie in the grill. 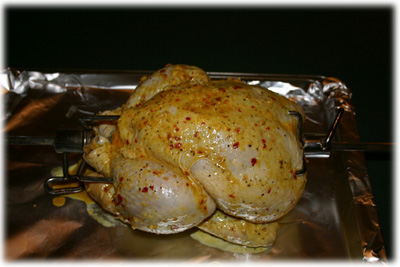 9 times out of 10 you'll need a disposable aluminum drip pan under the meat to catch the drippings. I also use liquids in the pan to keep the meat moist while cooking.

You'll also likely need to keep the grates out of the BBQ to make room for the spinning meat. 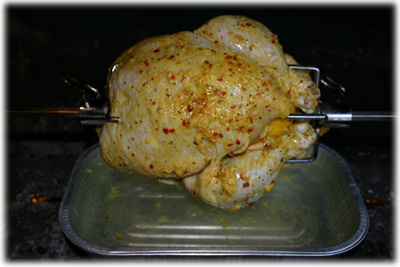 Step 5:
Check the meat several times as it cooks to make sure it's still spinning freely and any loose parts aren't dangling and getting in the way. Keep birds well trussed on the BBQ rotisserie. 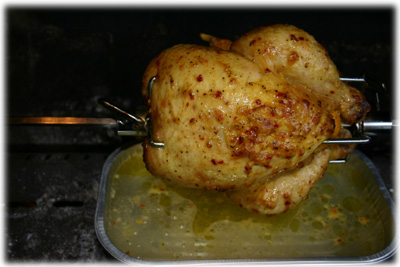 or on this new Rotisserie Cooking Sirloin Tip roast

Home › Barbecue Tips › How to use a BBQ Rotisserie 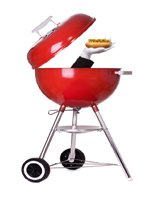